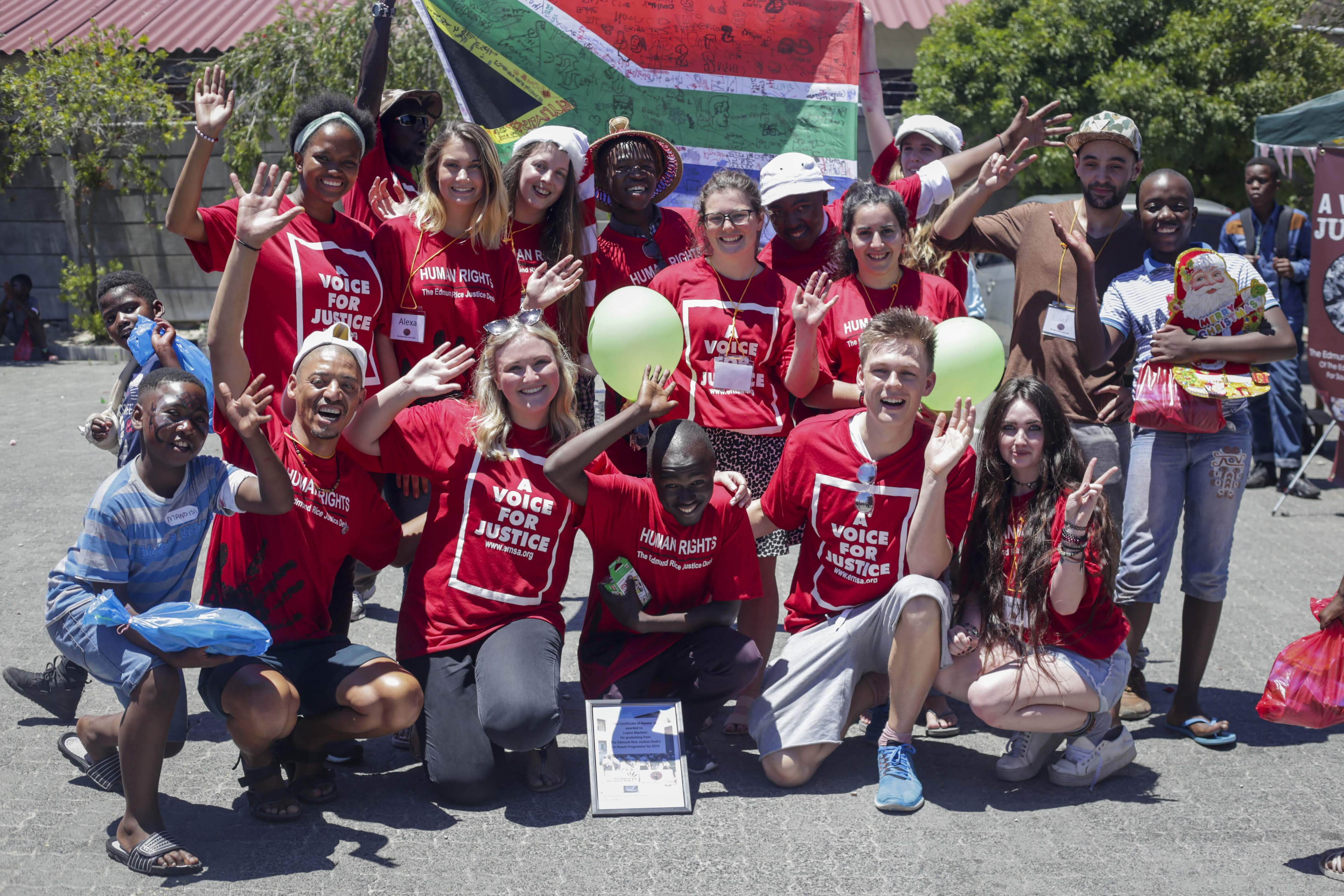 Queen’s Young Leader, Jessica Dewhurst and Justice Desk Operations Manager, Kayla Brittan, told us how they brought hope to the children of one of the world’s most violent communities.

The town of Nyanga, in the Cape Flats region to the southeast of Cape Town in South Africa, is the murder capital of the world, with approximately one in every 200 people there being murdered each year. Not far away is the township of Bonteheuwel, where gangs dominate and roam the streets with guns. “It’s one of the most gang ridden areas in our country,” says Kayla.

Bonteheuwel also happens to be one of the many communities where the Justice Desk work – educating communities and individuals about their human rights and helping them to advocate for the justice they are entitled to. “We did a lot of school visits, and trainings and workshops,” says Jessica. “We also got a lot of kids to paint what they want to change in their community.”

“We didn’t prompt them or anything,” adds Kayla, “And we had young children drawing coffins, gang shootings.” “Just drawings of dead people,” says Jessica.

So the Justice Team asked the children to draw what they wanted most in the world. To be famous? A beautiful dress? What? “There was one young girl,” says Kayla, “Do you know what she was painting? Beautiful colours! But it was ‘I want to be safe’.”

“But then there was this other boy,” says Jessica continuing the story. “And I said to him ‘What do you want to be when you’re older?’ And he went quiet and I thought he didn’t understand the question, because there was a bunch of kids I was interacting with. I looked over at him again and realised he was really thinking about it. So I was like oh cool I’m going to get a good answer here.

“And he looked at me and he said, “Ma’am, we both know I’m not going to live that long. He wouldn’t even allow himself to dream about what he wanted to be.”

A march for children’s rights

Statistics are not enough. Every social problem has a tonne of human stories behind it. These stories – and the children’s pictures – prompted the Justice Desk and the community of Bonteheuwel to organise a march for the rights of children on 30 June 2018. “The march was so important to give these kids a platform, for them to say ‘Enough is enough! We want to have a future,’” says Jessica, adding that there are over 60,000 people in Bonteheuwel, “but they don’t have a police station.”

Kayla describes the march. “It was a rainy day. We had children marching alongside us. So children were in the middle and adults were just on the outside to make sure these children were safe. And in the distance you could hear gunshots being fired.” “We had to like direct our march between the gangs so they wouldn’t shoot us while we were marching,” adds Jessica, “But those kids were like, ‘Ach man! It’s popcorn!’ It was incredible!”

The march ended with the Justice Desk and the community handing over the Bonteheuwel Peace Memorandum to the South Africa Police Service (SAPS) and government counsellors. In the Peace Memorandum they demanded the community get a police station to protect the people of the area. “Within a week,” says Jessica, “the police had contacted us and asked us for a meeting. They increased the patrols. They set up a silo police station. And the local South African Police Service is supporting our movement to have a fully fledged police station brought.”

Since July the police have been meeting monthly with Justice Desk and the people of Bonteheuwel. Jessica says, “The people in the community are saying ‘This is incredible!’ There are police officers driving through the streets. That’s something that they’ve never had before.”

Kayla emphasises that the Justice Desk’s approach is successful because they work with the community and give them the skills, the resources and tools, to advocate for what they need.

Jessica agrees. “They were trying to get a police station for years and no one was listening. All we did was we trained the local people. We equipped them. We showed them how to do a memorandum and how to communicate with a system like the police service.”

A good example of this, is the training Justice Desk did with the community on approaching the police and persuasion techniques. “We kind of prepped them before, said ‘These are the key things that they want to hear, so this is the kind of thing you want to say.’” Things like:

“We got them so ready for that meeting that they went in there and they kicked butt,” says Jessica smiling. “Those community leaders said all the right things.” And as Kayla points out, “They’re the experts in their community, not us. We know the tools and the resources and how to draft memorandums and how to do that and how to follow up, but they are the experts, they are the ones holding them accountable.”